So, it’s a been a long time since I’ve had time to get “crafty.” But we’re currently enjoying two weeks of what I like to call “in-between” time as we wait to close on our house. We’ve been very blessed to get to live in a church member’s BEAUTIFUL lake house about 45 minutes out of town during these “in-between” weeks. And since I’m finally finished with school work for the semester and have no boxes to unpack {yet} it feels a little bit like a vacation. Well, sometimes at least. Like maybe for the 2 hours each day that Mr. Boy naps. And then vacation is pretty much over for the day.

All that to say, I decided to take advantage of the calm before the storm {that will be moving into our house/having a baby} and make something to hang on the door when Mr. Boy #2 makes his arrival. Because clearly this will be my only opportunity to do so.

I’ve been admiring the burlap doorhangers that I keep seeing in all these cutesy giftshops for a while, but since I’m too cheap to drop 40 bucks and just BUY ONE ALREADY, I’ve been looking at ideas on pinterest and thinking about attempting to make one myself. I should say attempting again. Because a few months back I definitely tried to make a pumpkin that said, “HAPPY FALL, Y’ALL!” and it was a total flop. TOTAL. But I’m thinking it was because I didn’t have a good pumpkin pattern, and I’m not the best a free-handing a pumpkin. So, for baby JW, I decided on a little boy’s jon-jon…something for which I most definitely have a pattern.

It really was a pretty easy little craft. I just traced the outline of a size 24 month jon-jon onto some poster board and cut it out to make a pattern. 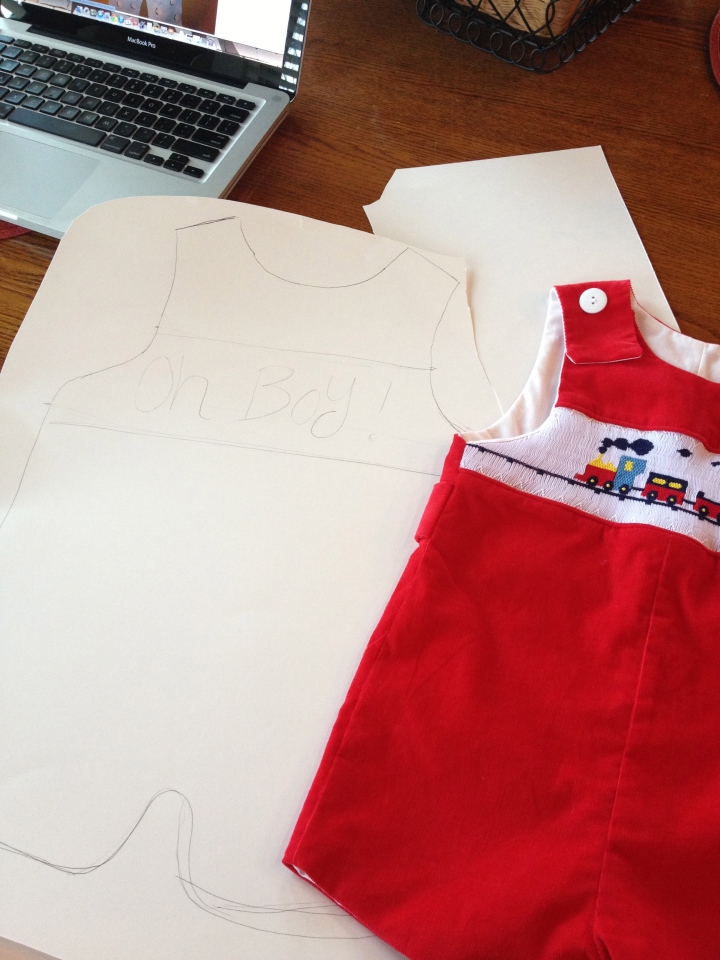 Then, I used blue paint to trace the pattern onto a piece of burlap (leaving space for the white/writing area). 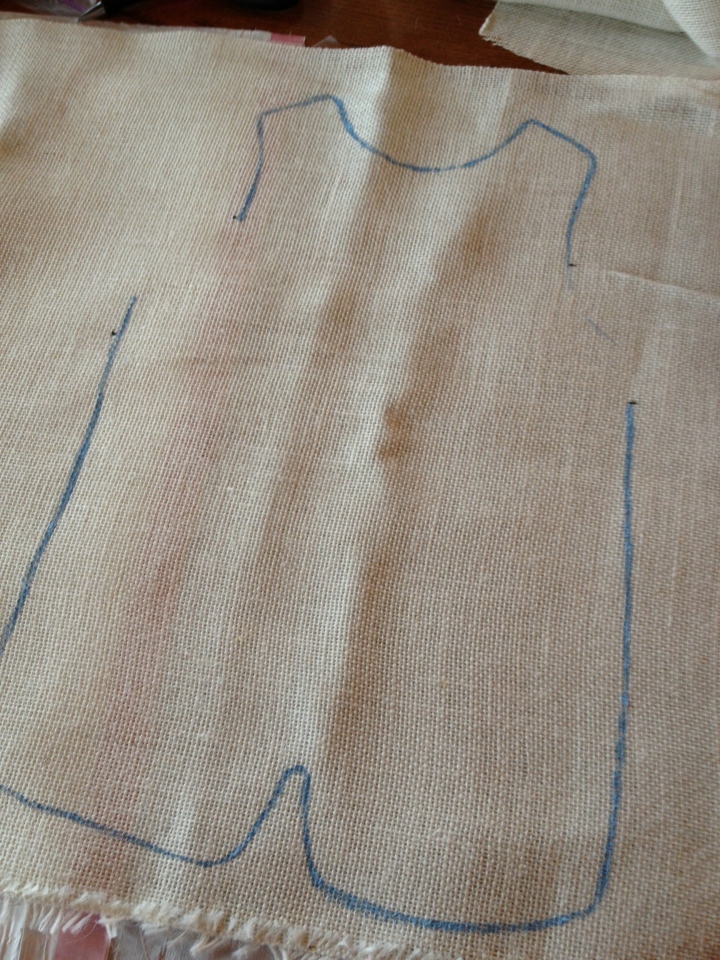 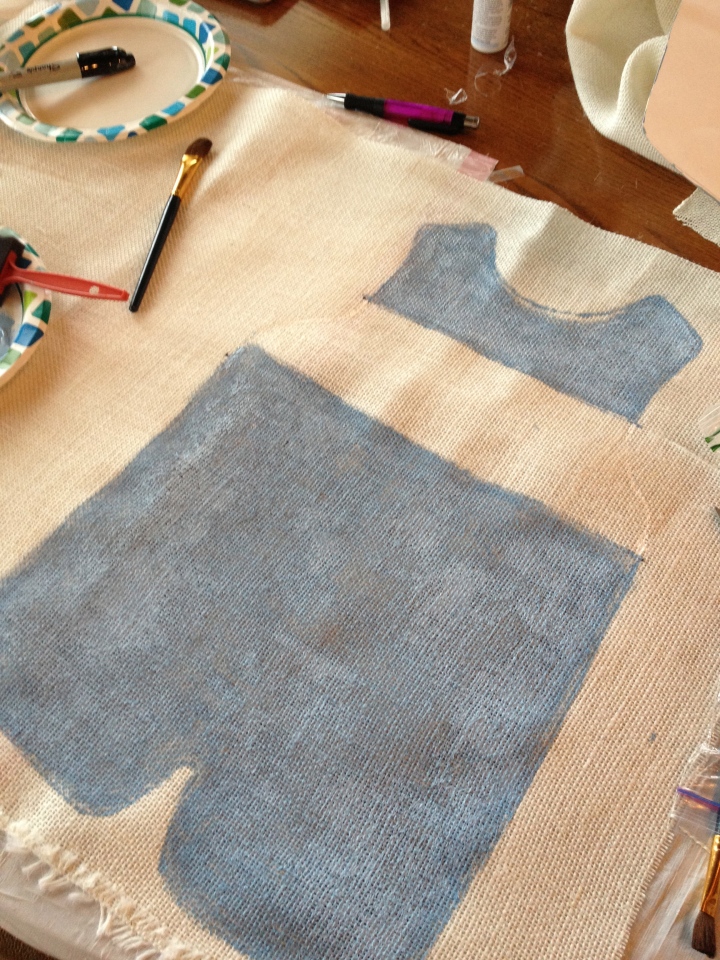 I used 3d, black fabric paint to outline the details and then cut out the jon-jon, leaving about half an inch of unpainted burlap around the edges. I decided not to use fray block because I sort of like the messy, ragged look of the burlap edges.

Then, I took a chance and free-handed the initials with a thick Sharpie. At some point in this process, I decided to go with his monogram instead of “Oh Boy!” even though I thought it was absolutely precious! I filled in the initials with the 3d fabric paint.

Below, you can see the white hanger I used. Adam just took a normal white wire hanger, folded the ends to make it small, and then flattened those rings with some pliers for me. The buttons were easy to paint on… 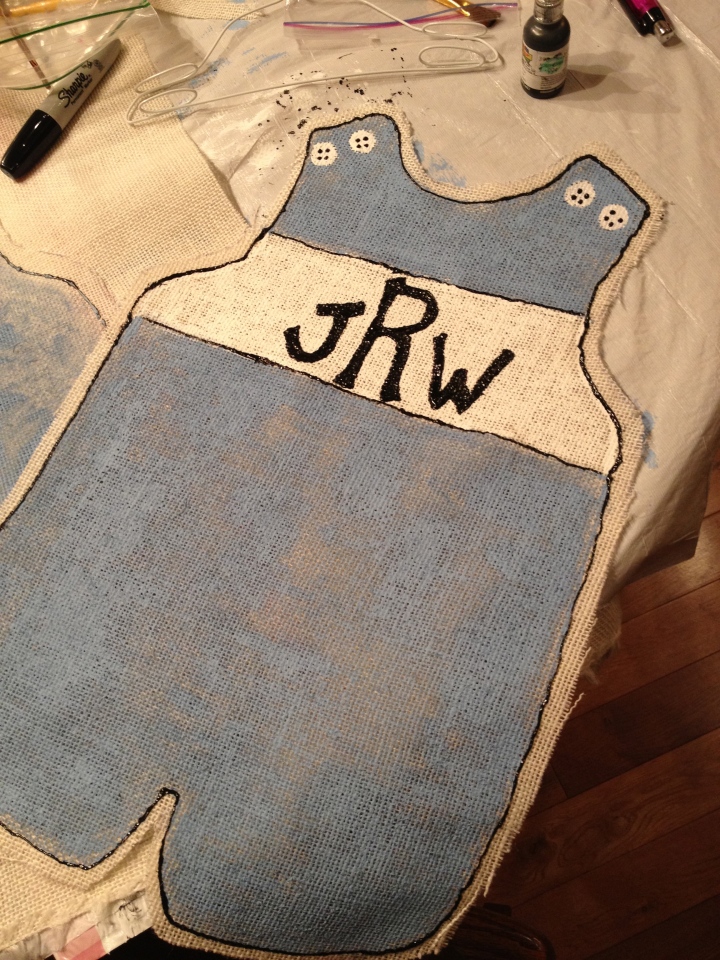 Finally, I hot-clued the two burlap pieces together, leaving just enough space for my hand to stuff the inside with grocery bags to give it shape. I actually glued the two pieces of fabric around the hanger, so it looks like a real hanging outfit. And I decided to nix the polka dots and just go simple.

So, that’s that. A fun, easy project for a lot less than $40. I think it will serve as a cute way to announce the arrival of our second little bambino.

And on a totally unrelated note, here’s a picture worth documenting of Mr. Boy enjoying the lakeside view. 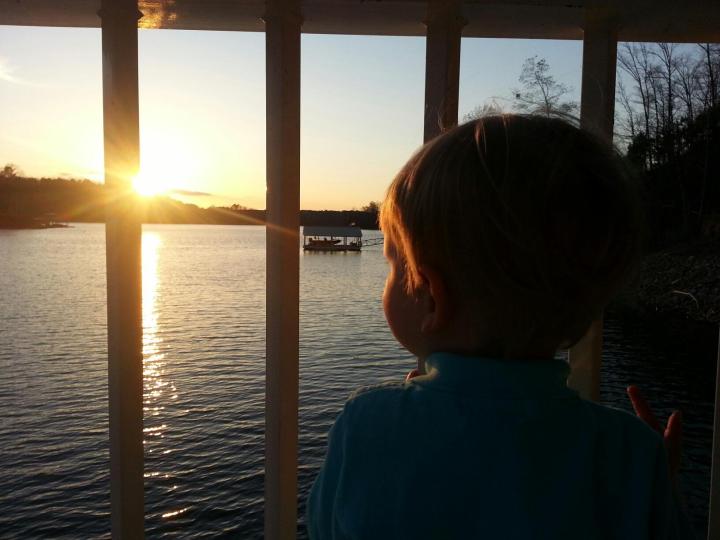 Let me just tell you, this little project that we decided to embark upon was a labor of love. And I’m thankful to say that it didn’t end in divorce 🙂

We’re not exactly experienced do-it-yourself-ers. But, alas, pinterest takes us all to new heights, causing us to believe we can do anything just because we read someone’s “how-to” blog tutorial. Let me tell you, the blogs make refinishing furniture sound easier than it is.

Our kitchen table has been in desperate need of some love since we got it about 3 1/2 years ago. Our table and chairs were living in Adam’s parents’ garage when we got married {I believe they were once Adam’s sister’s?}. His parents offered the set to us, and we eagerly accepted since we had not a stitch of furniture.

I loved both the table and the chairs, but they didn’t match. We were planning to repaint the table shortly after we got married, but it never happened. We’ve been busy for the last 3 years. Recently, though, we got the  notion that refinishing the table would be a fun project to work on together in all our spare time (HA). I read a few blogs and thought it sounded easy enough.

And, thus, we began.

Almost two weeks, a whole lot of work, and eight trips to Home Depot later, we finished. {FYI: Home Depot is less than a mile from our house. Good thing or we would have gone broke paying for all the gas to get there and back what seemed like a bazillion times}. After all that, though, I must say that I’m pleased with the finished product.

Here’s a photo of the table and chairs in our first apartment. I used those placemats to try to tie the wooden chairs together with the black table until we could get around to changing it. 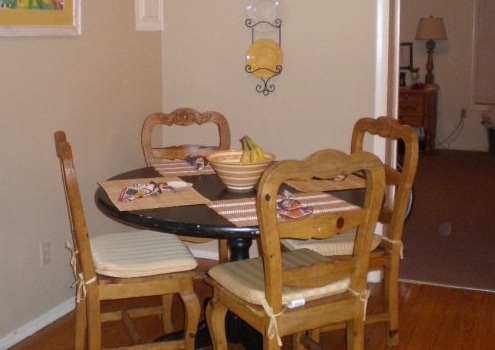 Our goal for this project was to sand the table down to the original wood and then stain it to match the chairs {as closely as possible}. Easier said than done. I really love the chairs, though, and wanted to leave them the same. The table was originally painted white and then black. Adam sanded through all that paint with an orbital power sander.

Here’s the tabletop sanded down to the original wood {that little spot on the bottom is just water}.

I decided to paint the base of the table green to match a green bench from Pier 1 that’s in our kitchen. With my shoddy painting skills, I was achieving the exact look I was going for–that distressed look with layers of paint showing through. I had to go inside to feed L, though, and Adam finished my painting job just a little too perfectly. So, I had to go back and scuff it up a bit with some sandpaper. This is Adam’s perfect version below.

After sanding down the table, we stained it with Minwax Wood Finish–Golden Pecan. This color choice came by recommendation from our new friend Bob at Home Depot. We took a picture of one of the chairs in and asked him to help us pick a color that he thought would match.

Well, unfortunately Bob was a little off with his color choice. This stain gave the wood on the table more of a red tint than the chairs had. To be honest, it wasn’t really Bob’s fault. It’s hard to pick a stain match based on one little iphone picture. The chair did appear to have more of a red tint in the picture.

So, I went back to home depot to consult with Bob. He told me that since we had only stained and not sealed the stain with polyurethane, we could use  paint thinner to get about 80% of the stain off. Then, he helped me pick a new stain that we hoped would match the chairs when combined with the 20% of the former stain left on the table.

And the new stain did match a LOT better. But the stain was slightly darker and exposed all of these little markings made from cross-grain sanding with the orbital sander. You can see them below…not too pretty.

So, we had to sand the entire table again, this time by hand. JOY! Luckily, we were able to get most of the markings out. We stained again, let it dry overnight, and then sealed it with several coats of polyurethane, sanding between each coat. The polyurethane bubbles very easily and dried leaving bubbles on the table after the first few coats. So we had to thin it by mixing it with some paint thinner.

This picture below shows how the green bench goes with the green table base {which is hidden when all the chairs are around the table}. It’s not an exact match but pretty darn close. Those fabulous chair cushions were on clearance at Pier 1. Score.

Here’s the finished product of the tabletop.

And here it is in our little breakfast nook. We did put a coat of polyurethane on each of the chairs so the finish would match the table. And we do have a fourth chair, but I’ve yet to poly it since we use the bench for seating.

So, there it is. I’m glad we made it through our first major DIY project. It was a lot of work, but I think it was worth it. And I’m certainly glad that my kitchen is back to being a kitchen rather than a workshop!

After the Christmas wreath came down, our front door was looking pretty bare. I had trouble deciding what to hang because I really didn’t want anything too seasonal or holiday specific. I had in mind a year-round wreath that I wouldn’t have to change out unless I wanted. So, I settled on burlap and got in touch with my crafty side… 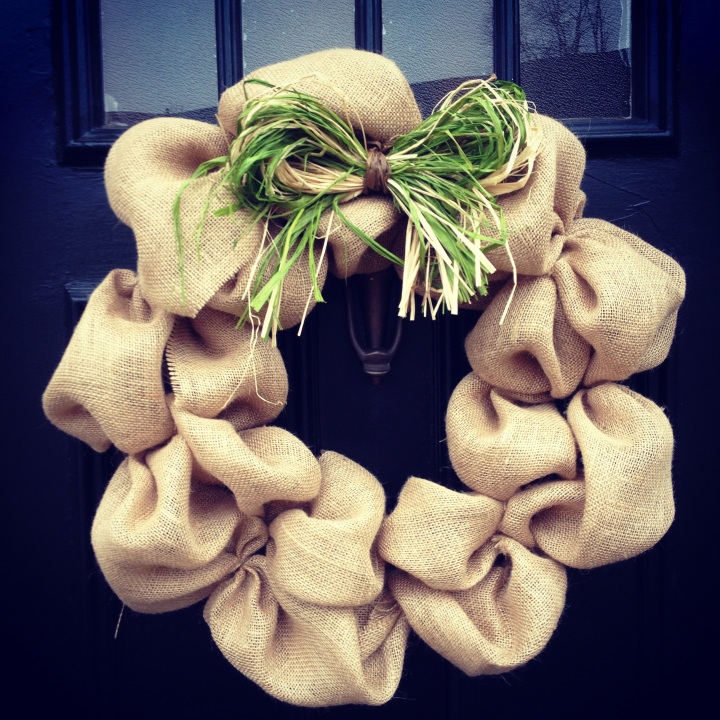 I’m pleased with the way it turned out.

This wreath was fairly easy to make {it took me a few hours, but I’m slow and had some interruptions} and the whole project cost me around 10 bucks. Can’t beat that.

I followed this great little tutorial that I found here. {This blog is fantastic, by the way! So many cute ideas}. There is also a Valentine’s Day version. I might try the heart next year, but since V-day is less than a week a way, I decided it wasn’t worth the effort this year.

I did add my own touch with a raffia bow instead of the burlap bow shown. Thought it needed a little pop of color. The great thing about this wreath is that you can use it all year and embellish it with various ribbons/seasonal decor.

Have fun with it, and make it your own!