Oh, how fast the months fly! {Especially with #2.} I can hardly believe our Wicksie has been here four whole months. He is such a sweet, good baby. He’s absolutely delightful, in fact. Bless his heart, I’ve hauled him all over the Southeastern United States in a month, and he’s just rolled with it. 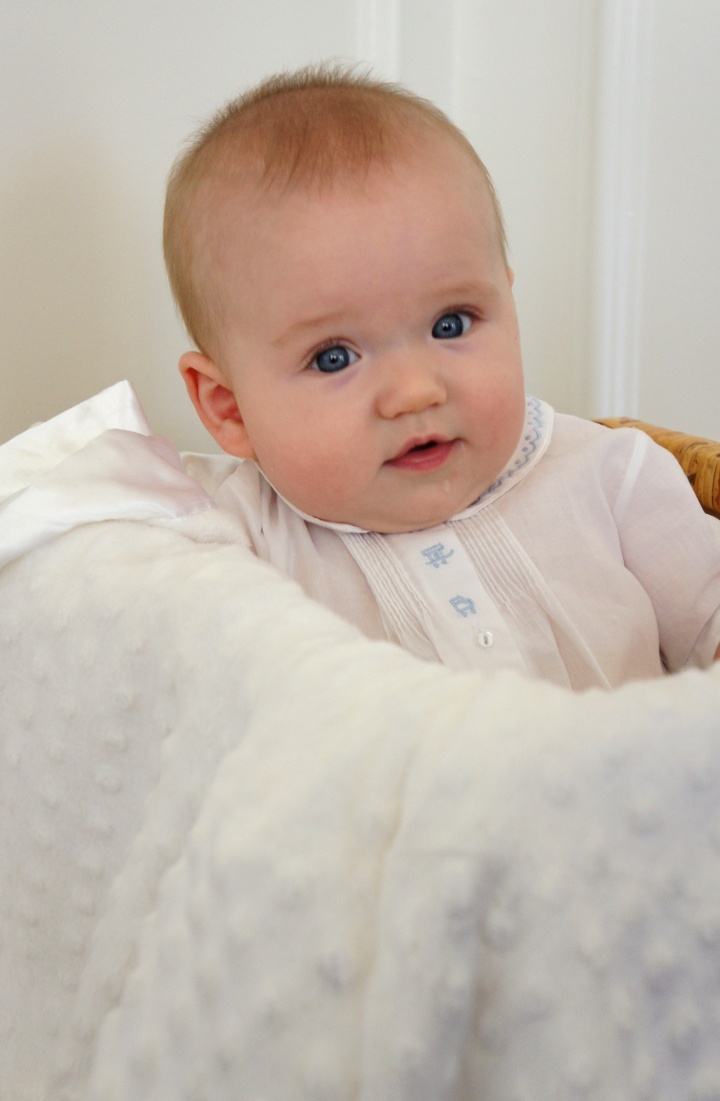 He has the bluest eyes and the chunkiest thighs you’ve ever seen. At 16 lb. (75th %) and 25 in. (50th%), he’s still a hoss child. Those rolls are just so darn kissable, though. He’s got the cutest, open-mouthed smile that lights up his entire little round face. He loves when people talk to him and flirt with him. He has the sweetest giggle. I just love when he gets tickled. He loves to roll from his back to his side {hasn’t made it all the way over yet} and look around. He’s started grasping small toys, most often the rattle hanging above his playmat. He’s started playing in his jumpy car and jumperoo. 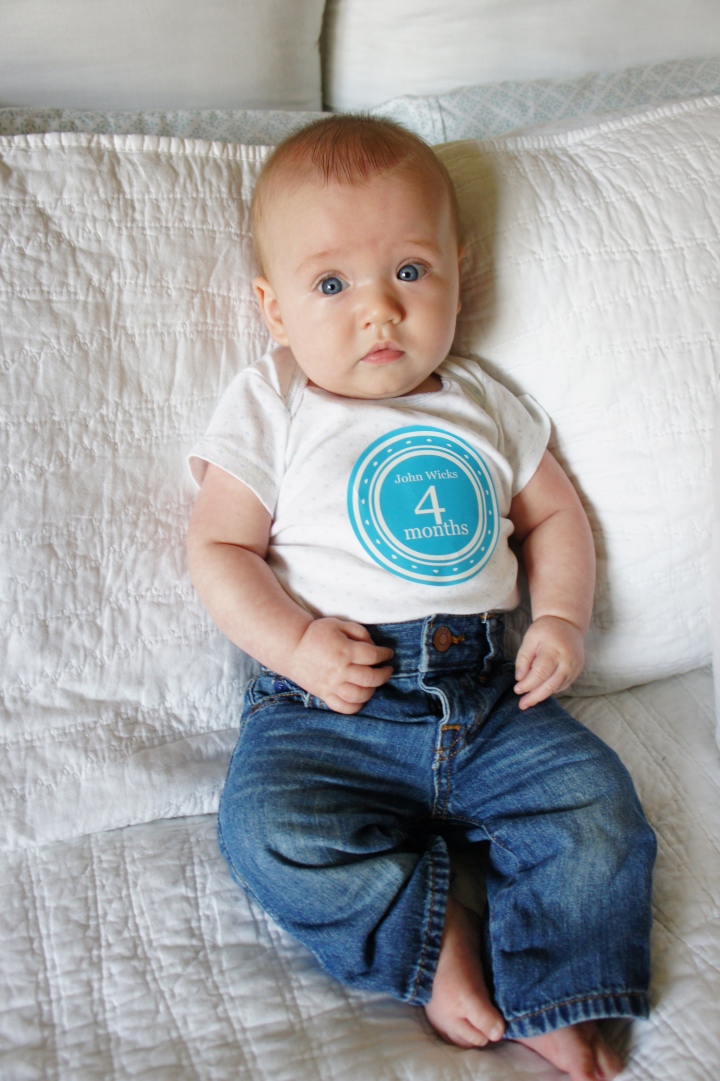 John Wicks is so alert and seems very aware of what’s going on around him. He definitely knows when I leave the room and usually doesn’t like it. He watches his brother play with a look on his face that tells me he’s dying to get in on the action. {Although, sometimes I’ll bet he’s thinking, “WOULD YOU PLEASE LOWER YOUR VOICE?!?!” Or maybe that’s just what I’m thinking.} JW thinks his daddy is absolutely hilarious.

Most nights lately, he’s been making it from 8 p.m. to 5 or 6 a.m. without a feeding {He goes right back to sleep after this feed, though. We do not start our day at the crack of 5 a.m. because GOD FORBID}. However, he usually cries at some point in the night. I’m not feeding him when he cries because my pediatrician assured me he does not need it nutritionally. We are trying to let him learn to soothe himself back to sleep on his own, but we usually end up going in and sticking the paci in his mouth after he cries for a while. That usually does the trick. He has no problem falling asleep on his own. I put him down awake for naps and bedtime, and he goes right to sleep. He just seems to need some comfort {paci} when he wakes in the night. I had stopped swaddling him pretty early on, but I’ve started back again. He seems to really like it {doesn’t fight it}, and I think it keeps him from waking himself up flinging his arms around. 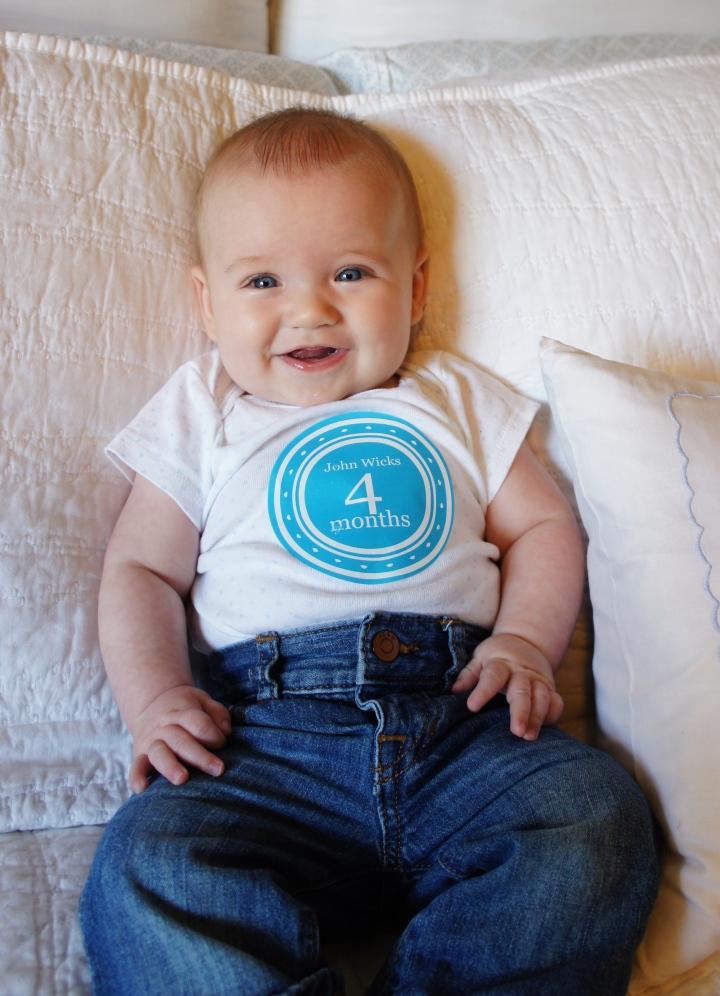 Unlike his brother at 4 months, Wicksie boy is a great napper when we’re at home. I put him down in his crib and he usually goes to sleep without a whimper. Luke would scream and scream and fought naps FOREVER it seemed. Then again, he slept 12 hours through the night without a peep. Why did I think they would be basically the same person? Silly me.

I’ve started introducing our littlest man to some solids. He’s tried cereal and a few fruits and veggies. I’m not going to lie, I don’t love the baby food phase. I probably would have put it off a little longer, but his ped and Doc thought it would help him sleep longer at night if he went ahead and started some solids. He’s still trying to figure out eating from a spoon, so right now feeding takes a while, and baby food gets all over him. But he’ll get it soon enough. And I’m so glad he seems to be more satisfied at night. He’s still nursing five times a day. 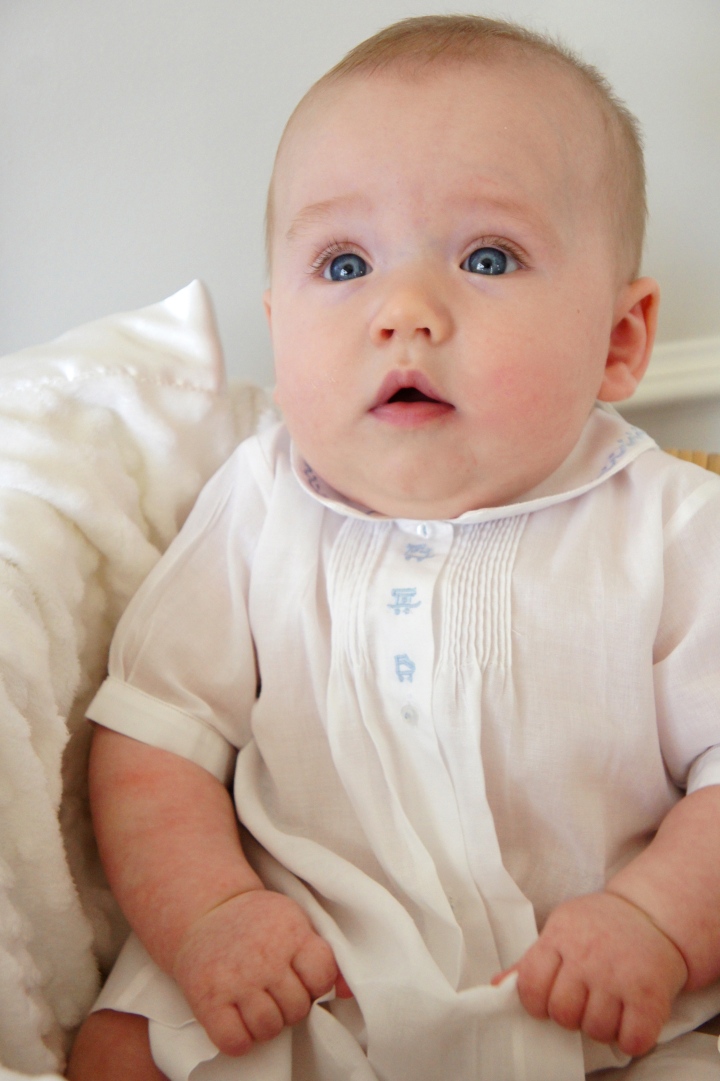 I’m so thankful for our second boy! John Wicksie {as Luke and I call him} brings so much joy to our hearts and fullness to our family. We can’t imagine life without him. We love him so and pray for many more months and years together.