So, it’s a been a long time since I’ve had time to get “crafty.” But we’re currently enjoying two weeks of what I like to call “in-between” time as we wait to close on our house. We’ve been very blessed to get to live in a church member’s BEAUTIFUL lake house about 45 minutes out of town during these “in-between” weeks. And since I’m finally finished with school work for the semester and have no boxes to unpack {yet} it feels a little bit like a vacation. Well, sometimes at least. Like maybe for the 2 hours each day that Mr. Boy naps. And then vacation is pretty much over for the day.

All that to say, I decided to take advantage of the calm before the storm {that will be moving into our house/having a baby} and make something to hang on the door when Mr. Boy #2 makes his arrival. Because clearly this will be my only opportunity to do so.

I’ve been admiring the burlap doorhangers that I keep seeing in all these cutesy giftshops for a while, but since I’m too cheap to drop 40 bucks and just BUY ONE ALREADY, I’ve been looking at ideas on pinterest and thinking about attempting to make one myself. I should say attempting again. Because a few months back I definitely tried to make a pumpkin that said, “HAPPY FALL, Y’ALL!” and it was a total flop. TOTAL. But I’m thinking it was because I didn’t have a good pumpkin pattern, and I’m not the best a free-handing a pumpkin. So, for baby JW, I decided on a little boy’s jon-jon…something for which I most definitely have a pattern. 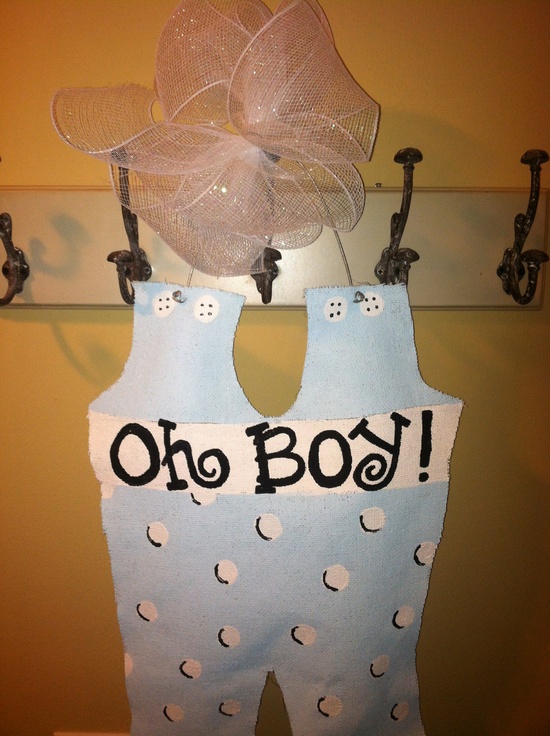 It really was a pretty easy little craft. I just traced the outline of a size 24 month jon-jon onto some poster board and cut it out to make a pattern.

Then, I used blue paint to trace the pattern onto a piece of burlap (leaving space for the white/writing area).

I used 3d, black fabric paint to outline the details and then cut out the jon-jon, leaving about half an inch of unpainted burlap around the edges. I decided not to use fray block because I sort of like the messy, ragged look of the burlap edges. 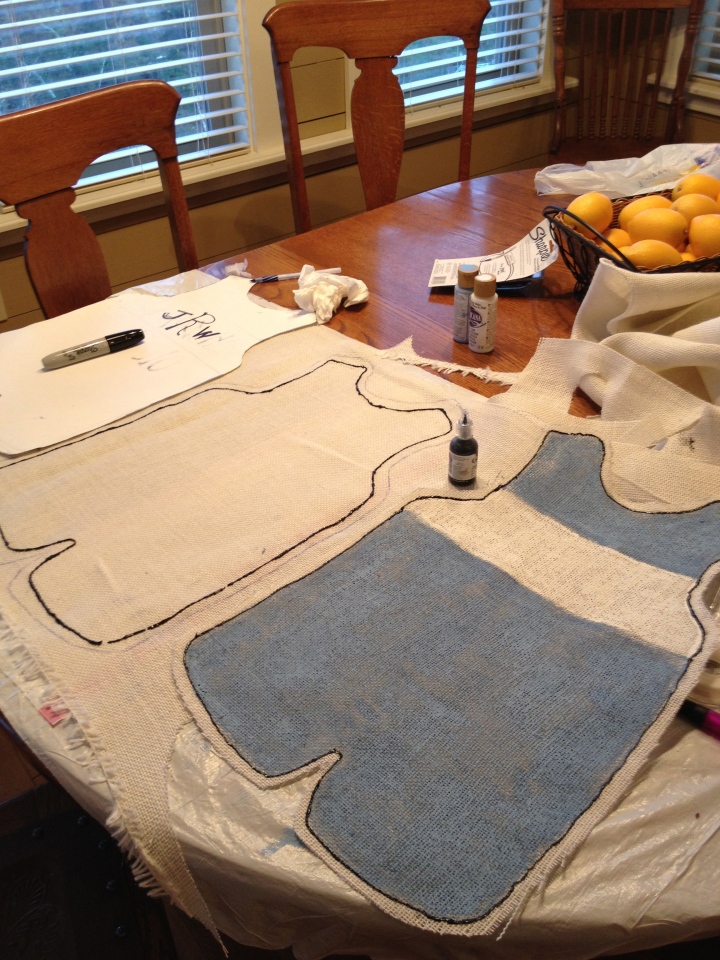 Then, I took a chance and free-handed the initials with a thick Sharpie. At some point in this process, I decided to go with his monogram instead of “Oh Boy!” even though I thought it was absolutely precious! I filled in the initials with the 3d fabric paint.

Below, you can see the white hanger I used. Adam just took a normal white wire hanger, folded the ends to make it small, and then flattened those rings with some pliers for me. The buttons were easy to paint on…

Finally, I hot-clued the two burlap pieces together, leaving just enough space for my hand to stuff the inside with grocery bags to give it shape. I actually glued the two pieces of fabric around the hanger, so it looks like a real hanging outfit. And I decided to nix the polka dots and just go simple.

So, that’s that. A fun, easy project for a lot less than $40. I think it will serve as a cute way to announce the arrival of our second little bambino.

And on a totally unrelated note, here’s a picture worth documenting of Mr. Boy enjoying the lakeside view.

One thought on “Burlap Door Hanger and Other Ramblings”