If you didn’t know, Chicago is a tad chilly in January. But the weather situation didn’t put a damper on our fun. It was so great to be able to sneak away to the big, frigid, windy city for a late anniversary getaway with my man. Sadly, this is the first time we’ve taken a little anni trip. Our actual day comes at a really hectic time of year (Dec 20), and we’re usually home visiting family and enjoying Christmas festivities.

We made the trip in our new {to us} minivan. I tell you this so you’ll fully understand just how cool we really are. Have I mentioned that we traded in the fun car for the swagger wagon? {Honda version but still swagger :).} Truthfully, after 8 years, the fun car had turned into the money-pit car and was at the VW shop at least once a month. It was time to say goodbye. We are thankful for a reliable vehicle with plenty of room to transport our growing family and our endless supply of strollers and gear. Seriously. Babies are small but they sure do require a load of stuff, especially when you’re traveling across three states.

{My friend Christy, also the proud owner of minivan, found us bumper stickers for the back that say “I used to be cool.” However, my siblings would probably tell you this is debatable in my case. Mainly because I’ve wanted a van since I was like seven, among other reasons}.

We arrived late, checked in, and then slept in late the next morning. It was glorious. Although, who am I kidding? I act like sleeping in is a rare thing or something, but I’m blessed with a child who will sleep until 9 am. I sleep in lots of days. Don’t hate. I realize this is all going to change come June.

We had a lovely breakfast together with no one whining or demanding yogurt and bites of our cereal. It’s the little things. Then, we set out {with absolutely no itinerary…or clue where we were going} to explore the city.

Navy Pier was completely deserted, as it was about 15 degrees out, but the views of the city and Lake Michigan were gorgeous.

We tried out Giordano’s deep dish pizza at the recommendation of Adam’s boss. It didn’t disappoint. Then, we had to try Geno’s deep dish pizza the next night because there was some dispute amongst Adam’s work people as to which place has the better pizza. So, Adam felt the need to settle it, and thus, we had deep-dish two nights in a row. But who’s complaining? Not this preggo. I was happy for seven whole meals with just my husband. It was like seven dates in a row. Oh, and Giordano’s won, p.s.!

I loved the city at night. It was kind of magical.

One of my favorite things we did was just walk up and down Michigan Avenue and go in some of the stores. We went in the biggest GAP I’ve ever seen in my life, and Adam actually wanted to try on some clothes. I’ve never once known him to initiate trying on clothes in a store. It was an anniversary trip miracle. 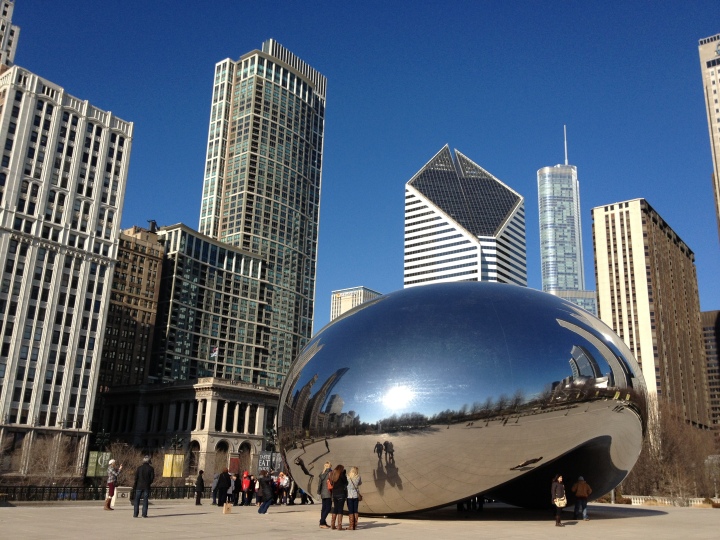 And I nearly died from hypothermia. . . 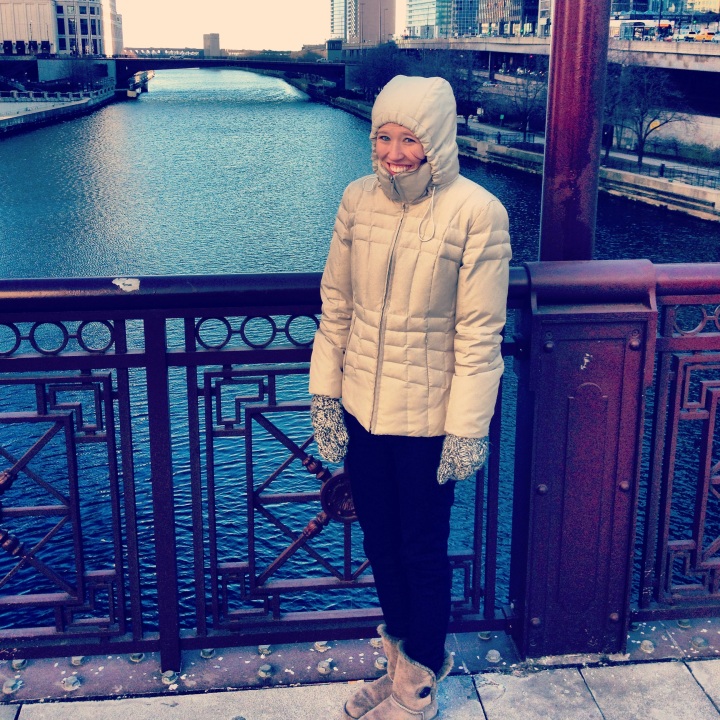 Adam was so sweet to take me to a show, which is one of my favorite things in the world to do! 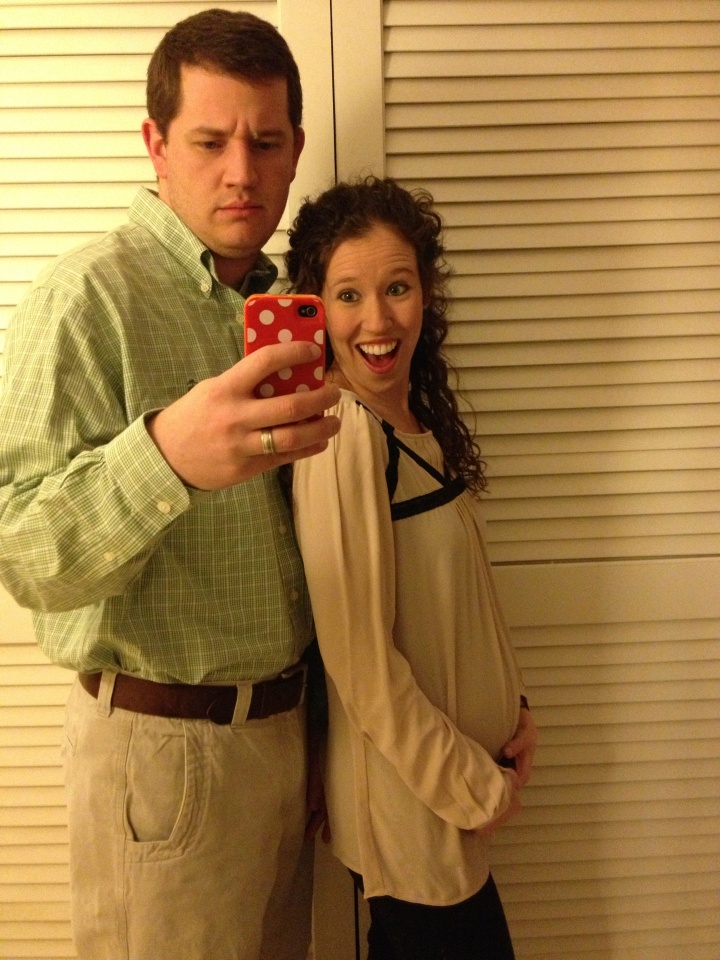 I Love Lucy was just the cutest thing! It wasn’t too long and was really funny and entertaining. I swear that Ricky’s voice was recorded from the T.V. show. He sounded EXACTLY like him. In fact, the actors and actresses who played Ricky, Lucy, Fred and Ethel were all excellent. They did a really awesome job impersonating the original characters.

After the show, we had a real treat! We met one of my dearest friends in the whole wide world for dessert at this fun little lounge that overlooks the city. You can’t really tell from this picture, but the view from the 96th floor was quite lovely.

Lauren is a student at Wheaton, and she was so sweet to come into the city to meet us. Catching up was so fun…like picking up right where we left off. Adam and I both have so many fun memories with her from college days…she is so dear to us!

{Please excuse how rough Adam and I look in this picture. Tired, much? I had to post for the memory}. 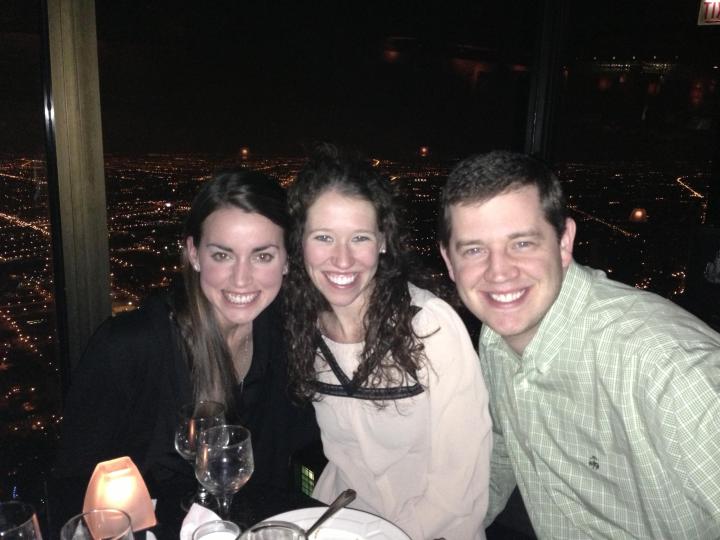 And then we got up the next morning and came home. And it was oh-so-good to kiss Mr. Boy’s sweet cheeks. A few days away together always recharges our batteries! Thankful for four blessed years with my Adam. . . and finally a chance to celebrate it!

{Oh! And a quick “thank you” shout-out to my sweet Mama who stayed in Louisville immediately following a 14 day trip to Israel and major jet-lag in order to keep a wild, rumbling, tumbling Mr. Boy for us. She loves us so well!}