“Wicks” because it was Adam’s mom’s maiden name, and I have a self-made rule that at least one of the names (first or middle) must be of family origen or have some sort of sentimental significance. Plus, I like that Wicks is kind of original.

“John” because . . . well, it’s strong and masculine and biblical. It goes well with Luke and makes for a nice double name with Wicks.

It’s really hard to name a child. I’ve gone back and forth thinking of all these different scenarios like “people will call him John Rice,” which is the plainest name ever, and then he’ll have to tell them he goes by the double name or “the baseball team is going to nickname him something like ‘J-Dub’,” which . . . GAG ME NOW.

Eventually, I just had to move past all that and make a decision based on what we like  and what we want to call him. And I like it. I think it suits him already. Since we’ve actually been calling the baby by this name for some time now, we decided it was time to commit.

I haven’t blogged much about this second pregnancy. It’s honestly been such a whirlwind. With my first pregnancy I was thinking about the baby constantly and reading every bit of pregnancy literature I could get my hands on. I was so excited for my belly to finally pop out so that I could see the evidence of that precious miracle.

With my second pregnancy, I’ve been like “Oh wow, I’m seriously almost 23 weeks along? How did that happen?” or “Another day still wearing my regular jeans?!? Score!”

During this second pregnancy, I’ve exercised less yet still gained less weight than with my first. Although this worries my dear, sweet mother a bit, there is a perfectly reasonable explanation. His name is Mr. Boy. And he wears me slap out.

Mom has no need to worry, though, because I’ve grown a small cantaloupe over the last  few days. It may be because I single-handedly ate an entire carton of Nutella (or the Kroger brand equivalent) in two short days. And I’m sad to report this is not the first time this has happened in the last month.

Or it could be those fudge brownies from Great American Cookie Company at the mall. Sometimes I go to the mall to exercise walk because I consider 26 degrees to be too cold for exercising outside and we refer to the track at the seminary gym as “the blue bowl of torture” since you have to do 12 laps to make a mile, and there is absolutely NOTHING to look at in the process. It’s such a temptation for a preggo with a sweet tooth to try to exercise at the mall, though. I mean, you pass Cinnabon, Auntie Anne’s, Godiva Chocolate store, and more. All I really want to do is buy a diet coke and some cinnamon pretzels, park myself on a bench, and enjoy. No wonder this babe is movin’ and shakin’ a lot. He’s swimming in sugar.

I joke. Well, a little bit. I usually get some exercise without succumbing to temptation, although I do indulge in the occasional fudge brownie. But hey, at least it isn’t hotdogs. The good news is that we’ve moved on from that eating phase. 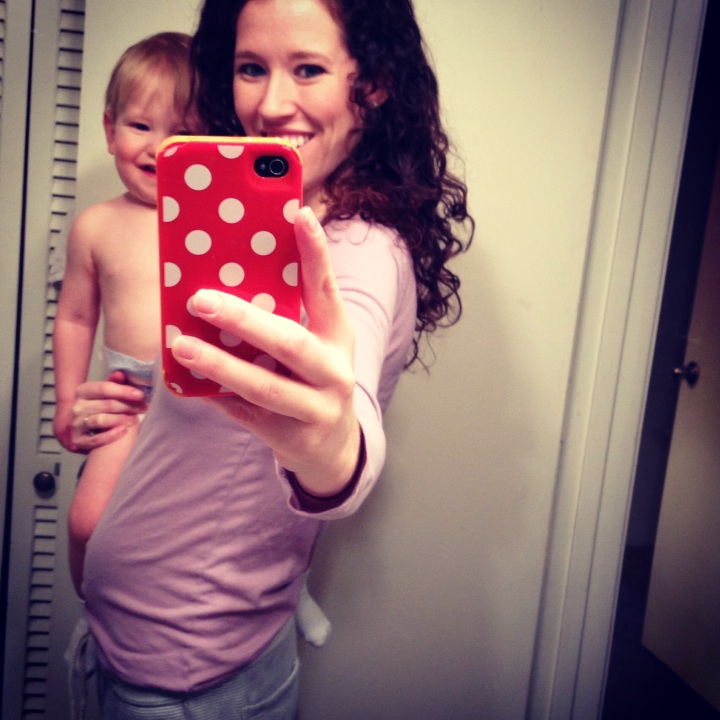 And here’s a fun picture that I haven’t shared yet. This was taken in early October. We had just found out dos was on the way, and all of Adam’s family happened to be together for his ordination weekend. Nonnie wanted to attempt a Christmas card picture of all the grands, and this is the absolute VERY BEST we could do between three cameras. In the middle of the COMPLETE PANDEMONIUM that is a Rice family photo shoot, Adam runs in and says…“WAIT! Someone is missing” and hands Hannah the little sign announcing our news.. 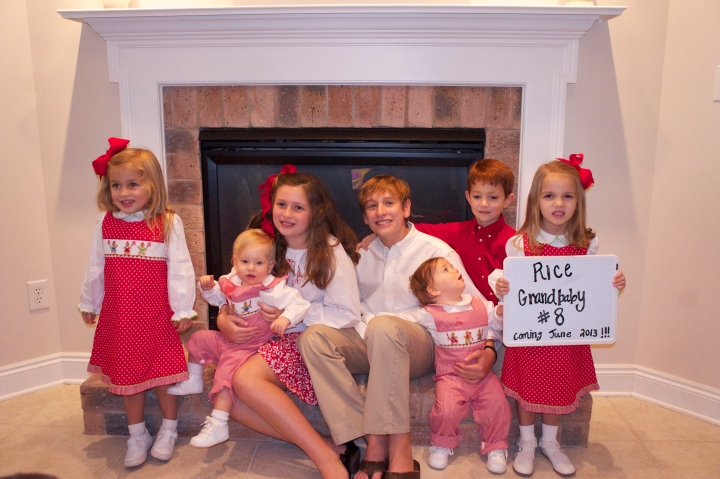 All their expressions make me laugh every. single. time. So excited that our little John Wicks is well on his way!