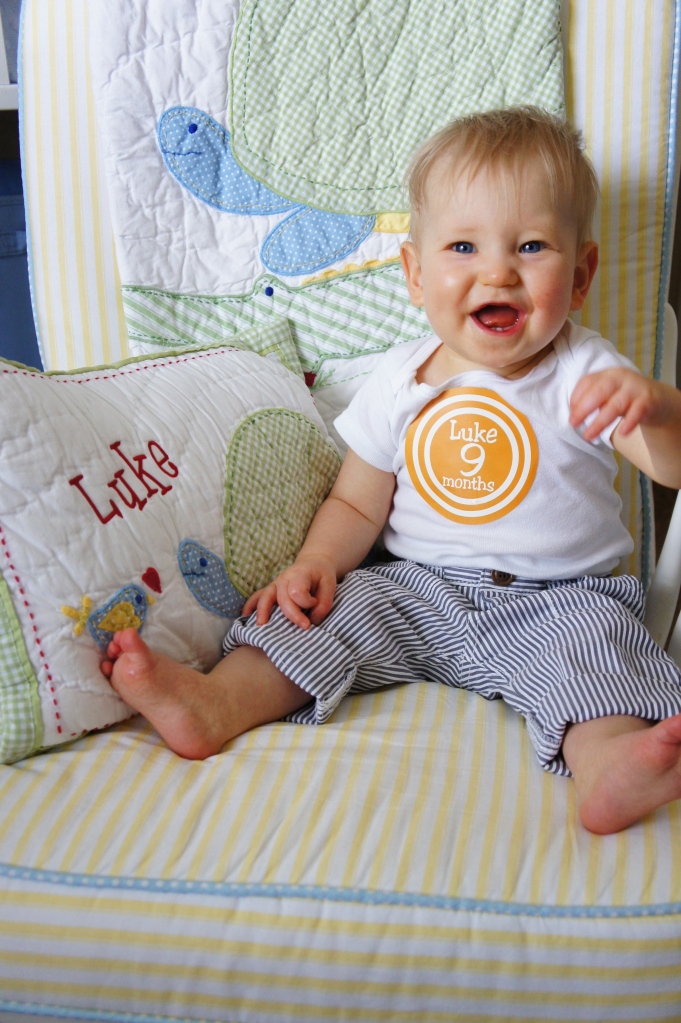 Whew! 9 months, and Mama is tired. Someone is crawling around everywhere and attempting to explore EVERYTHING. Toys don’t entertain as long as they once did. It’s more fun just to strew them all over the floor then move on to bigger and better things like extension chords, the tupperware cabinet, and shoe boxes. Because a cardboard box is WAY more fun than a singing, light-up Elmo. Our living room looks like this pretty much every day. . .

But messes are ok. Life is full and fun with a little Mr. Boy. I wouldn’t have it any other way.

– Still eating “baby food” but starting to transition to some table food. Has tried picking up and eating pieces of deli turkey, banana, blueberries, strawberries, avocado, cheerios, and puffs {his absolute favorite}. Very curious about whatever we’re eating and often acts as if he wants a bite. Loves to get his hands on a cup with a straw and has learned to take a sip from a straw {I think he may have gotten quite a few sips of my sweet tea as I was carrying him in from the car the other day}.

-Sleeping great {although I wouldn’t complain if the naps were a bit longer}.

-Crawling everywhere. Has learned to go from crawling to sitting position {always sitting up in his crib when I go to get him}. Pulling up to his knees when holding on to something.

-Responds to his name and seems to understand “No.” Does not necessarily obey, though! Sometimes when we say “no,” he’ll look at us with those dancing blue eyes as if to say, “what you gonna do about it?” and go right back to what he was doing. We’re already having to think about mild “discipline!”

-Loves all animals and pictures of animals. Mr. Snail and Mr. Turtle live on the wall beside his crib, and his face lights up every time he sees them. We tell them goodnight before every nap and bedtime. 🙂

-Loves books. Loves to pull them all off the shelf and turn the pages himself. Seems to enjoy when we read to him as well. I found him nestled into his very own little “reading nook” one night.

-Very social. Smiles and “flirts” with almost everyone we see.

-Laughs all the time. Has a cute little cackle!

-Very expressive and passionate with his feelings. When he’s happy, he’s deliriously  happy. When he’s grumpy or mad, look out!

-Requires a toy {or something to explore} in hand at almost all times but especially when having his diaper or clothes changed.

-Rarely still, but every now and then he’ll lay his head on my chest and snuggle close. Those moments melt me.

As the pediatrician was leaving the room after L’s 9 month appointment, he said, “Unless you need us before, we’ll see you again when he turns one.” And I kind of wanted to cry. Because how is it possible that my baby will be a year old in just three short months?!?

Life is fleeting. Some days are hard and exhausting, but every day is precious. Every day is a gift.

Happy 9 months, sweet boy! YOU are one of God’s greatest gifts.