-Eating solids 3 meals a day and nursing 4 to 5 times a day.

-Loves fruits, veggies, oatmeal and cereal and will eat meats when mixed with veggies. Has tried Baby Mum Mum crackers and cereal puffs (LOVES the puffs and is doing well with picking them up and putting them in his mouth). Can also pick up and eat tiny pieces of banana.

-Getting the hang of his sippy cup {I think?} but would still rather chew on it than drink from it. 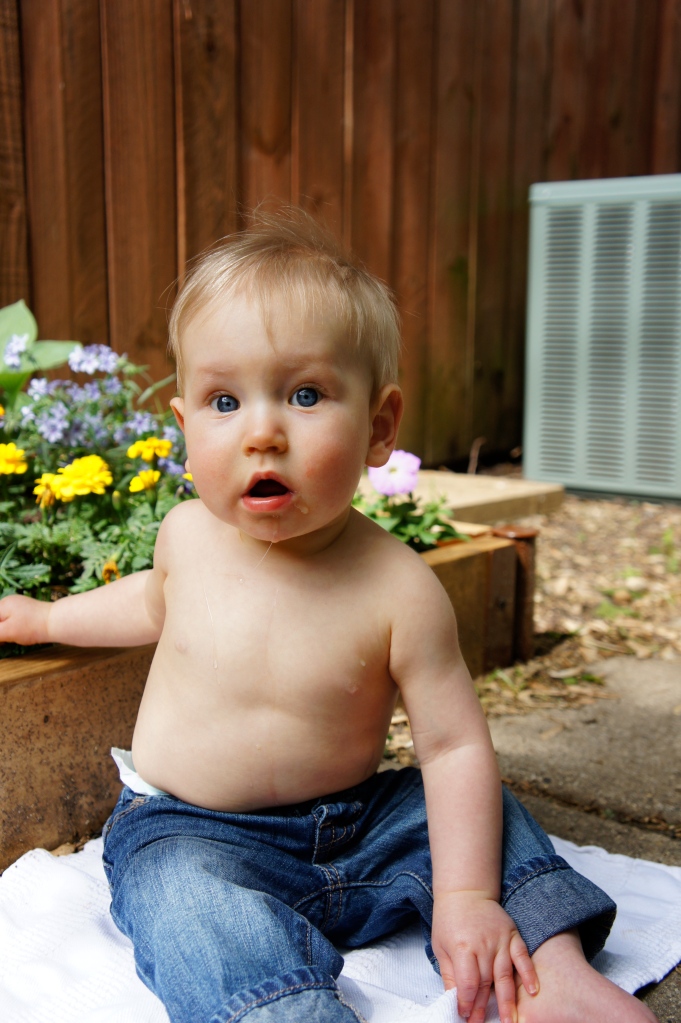 -Wants to crawl SO badly! Trying to get up on all fours, military crawling and stretching to get what he wants. Constantly rolling over and spinning around on his tummy. Pulls the bumper pads in the crib down so he can peek over them when on his tummy.

– Busy, busy boy! Loves exploring EVERYTHING and tries to get his hands on anything he can. Still obsessively putting everything he touches in his mouth. Loves to pull a toy basket over, look through it, and pull everything out. 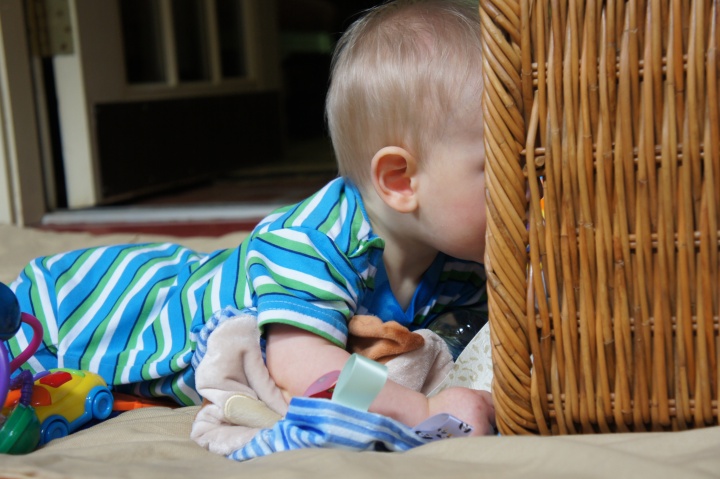 -Cutting 2 bottom teeth and has definitely been fussier than normal this week. Woke up screaming around 1 am the other night. This was the first time he’s woken up during the night in months, so we knew something was wrong. Baby Tylenol and Hylands teething tablets have been our salvation!

-Absolutely LOVES dogs. We visited my parents’ house, which I refer to as “the wild land of dogs,” and L just could not get enough of all those puppy dogs! Unfortunately, the dachshunds are scared of him because he grabs their ears, and the lab {although sweet} is too wild to play gently. Adam’s lab is a little bit older and calmer. 🙂

-Thumbsucker…big time! Puts that thumb in his mouth when he’s tired and MANY other times throughout the day. No longer taking a paci at all.

-Such a ham! Loved showing out and getting attention from Doc and J-J. Would open his mouth and say “AHHH” when he saw Doc. Then, Doc would laugh hysterically at him and respond, “AHHH.” Then, L would do it again, and this would go on and on. I think they both loved it.

-LOVES being outside {and trying to eat dirt :)}! 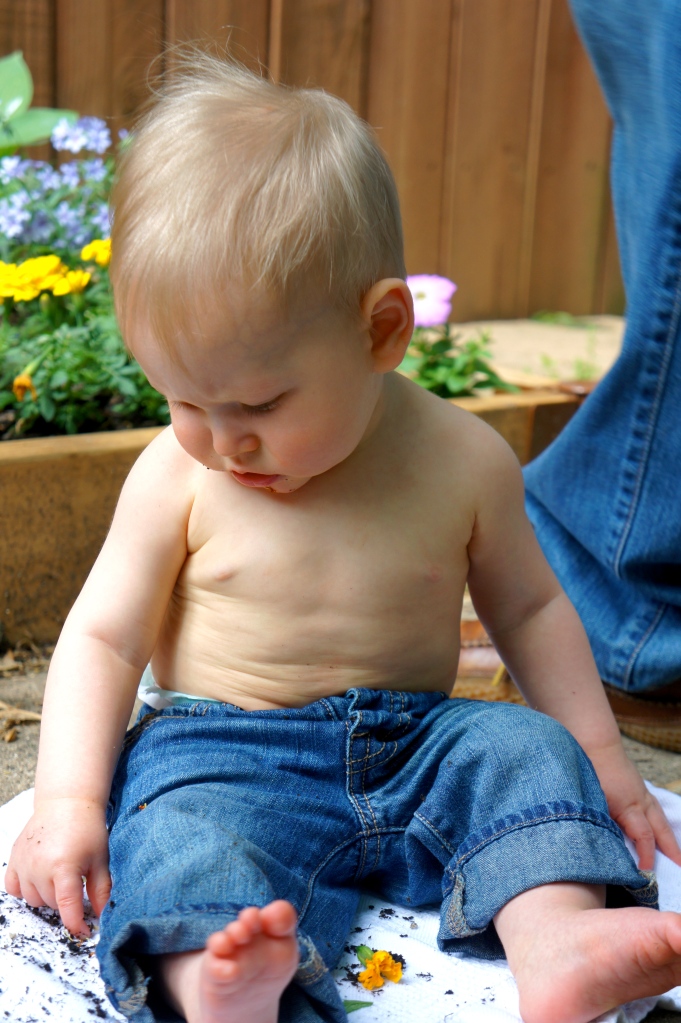 -Having a little bit of separation anxiety, especially during the late afternoons and since he’s been teething. Will fuss and reach out his arms for me if I try to leave the room for a second.

-Weighs about 17 pounds, according to our scale. Wearing size 9-12 month clothes and size 3 diapers. He’s a “long tall drink of water” as Doc Doc would say. Legs hang over the end of his infant carseat already.

– Smiles all the time and eyes sparkle with delight and a hint of mischief! Such an easy, happy baby. . . 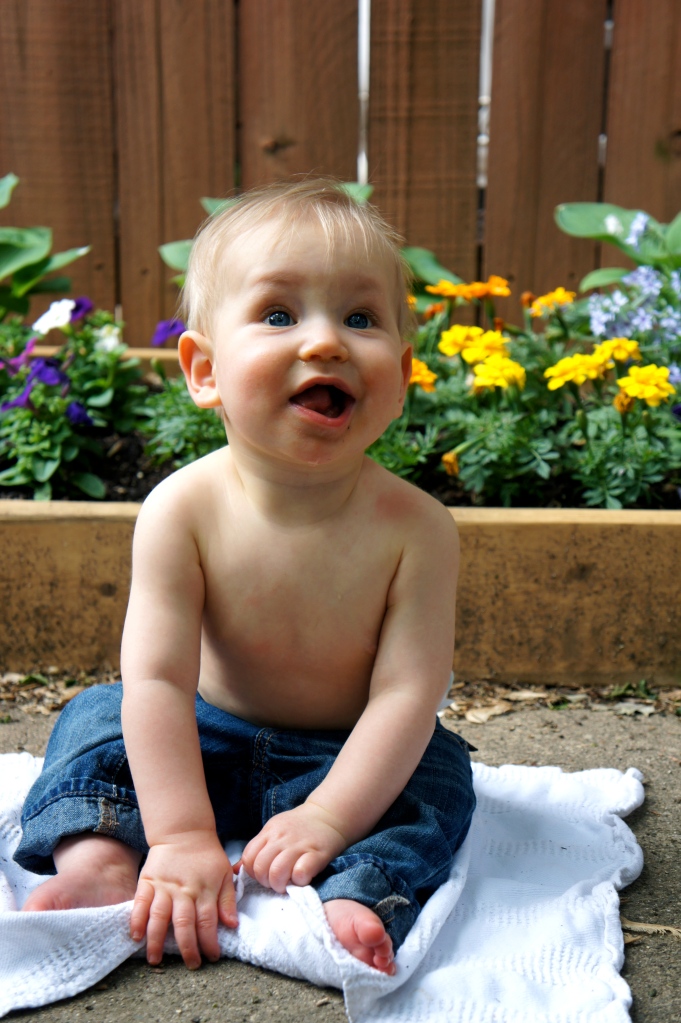 The light of our lives!