{Excerpts taken from The Jesus Storybook Bible by Sally Lloyd-Jones} 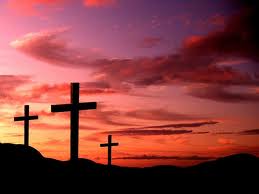 “So you’re a king, are you?” the Roman soldiers jeered. “Then you’ll need a crown and a robe.” They gave Jesus a crown made out of thorns. And put a purple robe on him. And pretended to bow down to him. . .Then they whipped him. And spat on him.

They didn’t understand that this was the Prince of Life, the King of heaven and earth, who had come to rescue them.

They walked up a hill outside the city. Jesus carried the cross on his back. Jesus had never done anything wrong. But they were going to kill him the way criminals were killed. They nailed Jesus to the cross. “Father, forgive them,” Jesus gasped. “They don’t understand what they’re doing.”

“You say you’ve come to rescue us!” people shouted. “But you can’t even rescue yourself!. . .If you were really the Son of God, you could just climb down off that cross!” they said.

And of course they were right. Jesus could have climbed down. Actually, he could have just said a word and made it all stop.

You see, they didn’t understand. It wasn’t the nails that kept Jesus there. It was love.

“Papa?” Jesus cried, frantically searching the sky. “Papa? Where are you? Don’t leave me!” And for the first time–and the last–when he spoke, nothing happened. Just a horrible, endless silence. God didn’t answer. He turned away from his Boy.

Even though it was midday, a dreadful darkness covered the face of the world. The sun could not shine. The earth trembled and quaked. The great mountains shook. Rocks split in two. Until it seemed that the whole world would break. That creation itself would tear apart.

The full force of the storm of God’s fierce anger at sin was coming down. On his own Son. Instead of his people. It was the only way God could destroy sin, and not destroy his children whose hearts were filled with sin.

Then Jesus shouted in a loud voice, “It is finished!” And it was. He had done it. Jesus had rescued the whole world.

Jesus’ friends gently carried Jesus. They laid Jesus in a new tomb carved out of rock. How could Jesus die? What had gone wrong? What did it mean? They didn’t know anything anymore. Except they did know that their hearts were breaking.

“That’s the end of Jesus, ” the Leaders said. But, just to be sure, they sent strong soldiers to guard the tomb. THey hauled a huge stone in front of the door to the tomb. So that no one could get in.