So, yesterday Luke and I flew back to Louisville after our Christmas vaca in Alabama. Adam returned a week before us to go back to work. As my brother-in-law often says, “Somebody’s gotta fund the dream.” All that to say, it was just the two of us flying back.

Now, this wasn’t Mr. Boy’s first flight. He flew for the first time back in October, and the whole experience was an absolute breeze. He cooed and smiled at everyone as we went through security, and people oohed and aahed about what a precious little thing he was. We strolled through the airport, and he happily took it all in. He fell asleep as we were boarding the plane and slept practically the whole flight. So, naturally I’m thinking that this whole flying-with-an-infant thing is a piece of cake.

L’s second flying experience looked just a little bit different. Part of this could be attributed to the fact that he didn’t get a good morning nap, and it was almost feeding time when we arrived at the airport. At any rate, he was getting fussy by the time we got in the long line to go through security. By the time we got to the front of the line {and I was trying to take off my jacket and boots, fold up my massive stroller, and balance my diaper bag, purse and camera bag}, Mr. Boy was screaming at the top of his lungs. And he screamed…and screamed…and screamed. I knew he was hungry, but what could I do about it while we were trying to get through security? I tried to calm him, but this child would not be calmed until he had food in his tummy. We made quite a scene.

We finally made it through security. Well, round 1 of security. Once we got through that little scanner thing, they decided they needed to go through my entire dipaer bag piece by piece. And let me tell you, they took their dear, sweet time doing it. Mind you, L is still screaming bloody murder, and I’m trying to hold him while getting my shoes back on and gathering all of our stuff. It was a balancing act, and people were staring. We were still making a major scene. I really just wanted to say, “Look at me, people! I’m a little curly-headed girl who, according to the children I used to nanny, looks like a teen mom. I DO NOT HAVE A BOMB IN MY DIAPER BAG!” Now, don’t get me wrong. I’m thankful for thorough airport security, but it was just a really stressful experience.

So, we finally make it through all rounds of security, and I realize that I’ve got a about 40 minutes before my plane takes off. L is still screaming, but I can’t stop to feed him because I’ve got to hurry to our gate. Now, I didn’t have a bottle with me because, out of nowhere, Mr. Boy has decided that he no longer likes taking a bottle and would prefer to nurse only. But this is another story. So, initially I had planned to find a bathroom or a private place to nurse him before the flight, but things took longer than expected, and I had to get to my gate immediately. We finally made it, L screaming all the way, and I quickly realized that there was no private place to nurse. People were EVERYWHERE. I didn’t want to leave the area near our gate for fear that we would miss our flight.

So, what did I do? Yep, you guessed it. I sat down on a bench in the middle of the Birmingham airport, whipped that thing out, and fed that screaming baby in front of God and everybody. I was so stressed that I wasn’t even really discreet about it. I was just praying that I would not see anybody I knew. Now, please understand that this is extremely uncharacteristic. In the beginning, I would only nurse in front of Adam and my mom. I guess you could say that I’ve come a long way.

We had to board the plane before L was fully satisfied, so I had to nurse him AGAIN on the plane while sitting next to a 20-something year old man. Lord, have mercy.

Thankfully, He did have mercy, and Mr. Boy fell asleep for the last half of the flight. By the time we were off the plane, my happy baby was back. 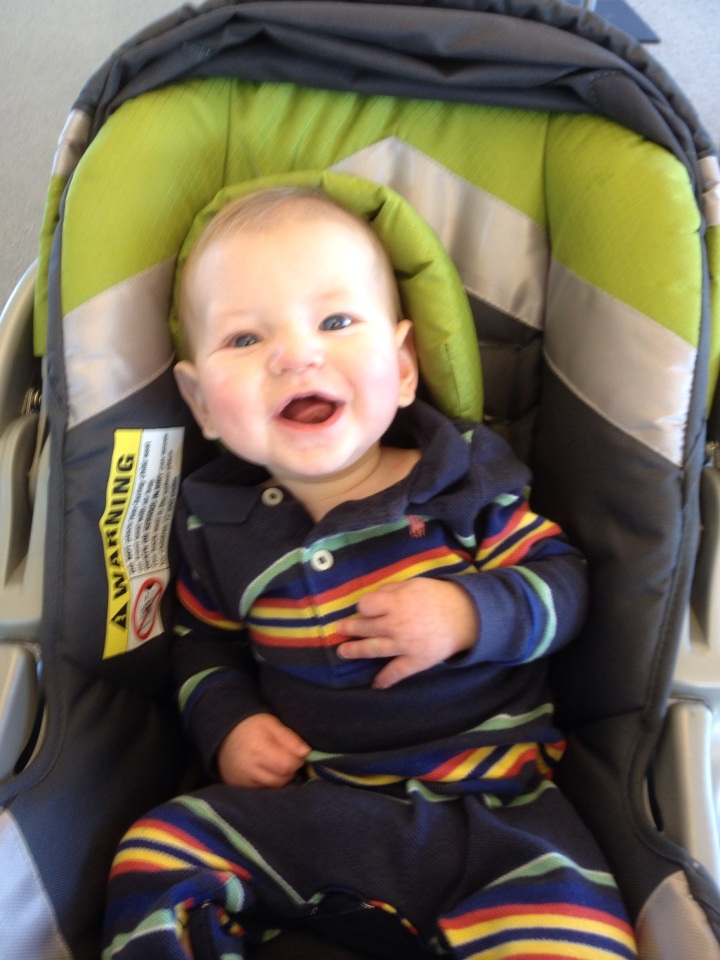 How could I stay frustrated with that sweet face?

My sister-in-law told me that if I could fly by myself with a baby, I could do anything. After this second flying experience with Luke, I can heartily say, “‘Tis true!”