I’ve been meaning to write Luke’s 3 month post for over a week, and I have a number of other things I’d like to share as well. Life has been just a tad crazy for the Rice family lately, though. I’ll spare you the details, but let me just say that we are moved and {somewhat} settled into our new townhouse, and we are staying put for the next few weeks until Christmas travels begin. For this, I am grateful. L has done very well with all the travel and transitions. Bless his heart. He is a sweet, laid back little man. God knew what I needed. 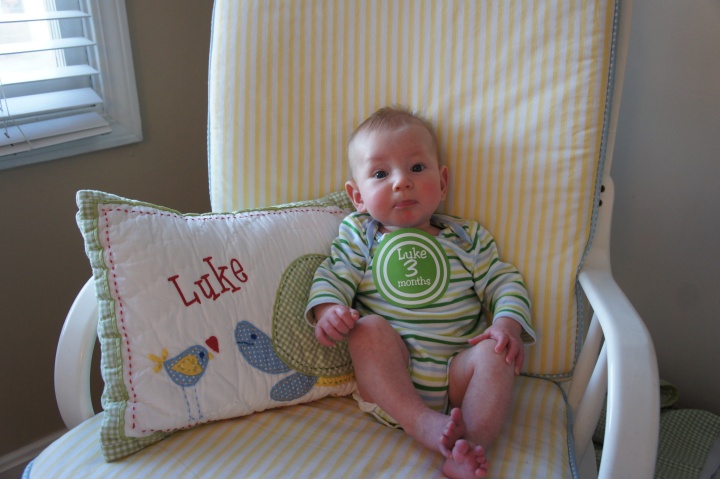 So much has happened in L’s 3rd month, so prepare yourself for some details that may only be interesting to moms and grandmoms. Sorry! I wish I had done a better job jotting down exactly when all these things occurred, but again, things have been nuts. Here’s a quick run-down of what our boy has been up to…

* Cooing (talking), laughing and smiling all the time! Adam gets right in his face and makes all these weird snorting noises, and L just thinks it’s hysterical. He will laugh and laugh. Cracks us up.

*Really learning to grasp things. Several weeks ago we started hanging little toys from the side of L’s play gym. He would punch/ bat the toys to make them jingle, but he couldn’t grab them. I came in one day to find him firmly grasping his monkey’s tail. It was so cute! He’s constantly grasping and pulling my hair as well…painful.

* Putting hands and anything else he can into his mouth CONSTANTLY. If my hand comes near his face he tries to put it in his mouth and gum it. The child really acts like he’s already teething. Drooling all the time in great quantities. Completely soaks the front of most of his outfits (when I forget to put a bib on him).

* Trying to roll over. One morning we heard L making fussing/grunting/struggling sounds from his crib. Adam went to get him and found that he had rolled from his back to his stomach WHILE still swaddled. He was stuck and couldn’t get back over. Freaked me out, big time. He has rolled from back to stomach just a few times since, but he can’t get from stomach to back yet. I definitely catch him trying sometimes, though. L does not like tummy time. He would much rather be on his back.

*Transitioned from bassinet in our room to big crib in his nursery (with great ease) at about 9 weeks. When we returned from our 2 week trip to Alabama, L had practically outgrown his bassinet. This boy is LONG.

* No longer swaddled at night (since about 12 weeks). I was planning to swaddle L until about 6 months because it helped him sleep so well early on. This, apparently, was not his plan. Around the 12 week mark, we found him completely out of his swaddle two mornings in a row (and we used the kind that velcro)! The very next morning was when he rolled over in his swaddle, and at that point we decided it was time for it to go. I was so worried he would stop sleeping through the night without his swaddle (he had been doing it for about 2 weeks), but he transitioned well.

* Still not a great napper. L will usually nap for about 45 minutes to an hour at the most. He sleeps best in his car seat on the road (will sleep for several hours in the car). This is probably my fault because I haven’t made him nap in his crib consistently. At least he sleeps well at night!

* Loves new people, places, and big social events. I’m guessing he’s going to be a little people-person like his daddy. 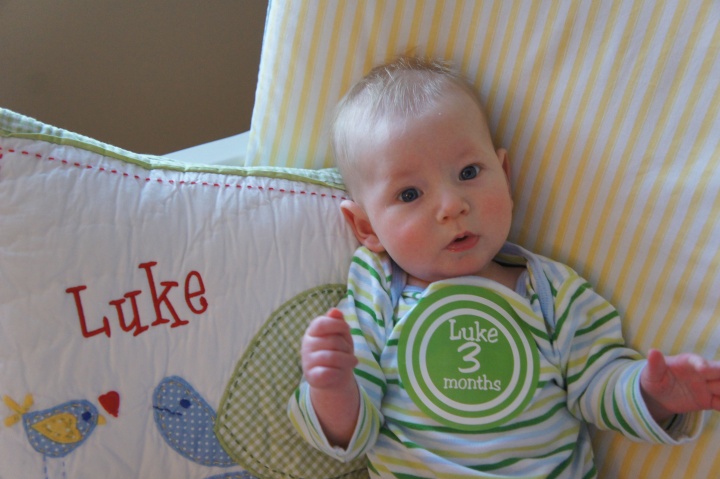 I can’t believe 3 months with you have come and gone. It’s already going too fast. You are such a joy to your dad and me. What a gift! We didn’t know we could love someone so much. We are so enjoying watching your grow and change and learn new things. You are more fun each day. We cannot wait until we can talk to you and know what’s going on inside that little mind. We pray that the Lord would bless and keep you and make His face shine upon. May he be gracious to you and bring you peace. We love you so much!